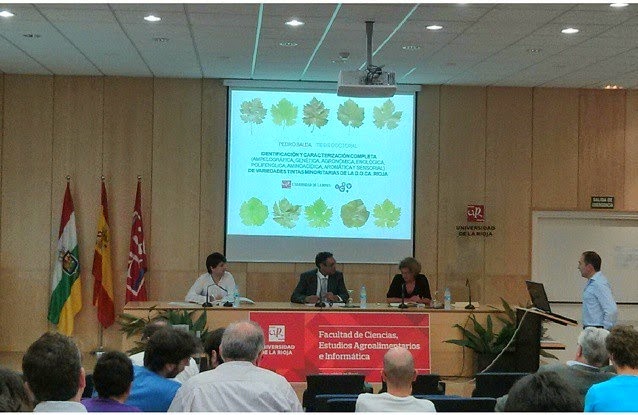 Here is a brief abstract from the author:

Throughout the history of vine growing across the world, spanning thousands of years, a great natural genetic diversity has been generated but many grape varieties also have been lost because of the phylloxera invasion. The modernization of viticulture has also contributed to further deterioration. All grape species have an essential role as “open genetic source” to handle any adversity that may threaten the vineyards and to respond to needs of the wine industry. Therefore, it is crucial to preserve all remaining genetic resources, especially in the world’s oldest vineyards.

Following this strategic line, a preservation project began in 1998 focusing on the oldest vineyards of Rioja, looking for minor and unknown varieties in danger of extinction. After six years and more than 700 vineyards analyzed, 76 accessions were recovered. The present study is now analyzing the 45 red grape varieties of these 76 accessions.

The main objective is to identify and characterize completely all the red grape accessions to provide solid facts about the history of genetic heritage in the Rioja Appellation and to open new possibilities for grapevine industry development.
As a result of both, the genetic characterization based on 11 nuclear microsatellites and the ampelographic description with 44 OIV characters, 24 different genotypes and two somatic variants on berry color were observed. This pinpointed 26 varieties in total, and only two were unknown.

The agricultural characterization detected a high variability on the productive parameters. The enological characterization of must and wines were also examined in two consecutive years. Besides of the basic chemical analysis, HPLC and GC-MS techniques were used to describe the complete profiles of anthocyanins, amino acids and volatile compounds. Furthermore, the relationships between amino acids in the must and wine aromas was established. Finally, a sensory evaluation of the different wines was conducted to highlight the specific characteristics of each variety.

The grapevine diversity of Rioja’s minority red varieties is enormous. So there is also great potential to produce wines that reflect the heritage of many generations of growers and the vine evolution within our grape growing region.
Publicado por Jaime en 10:00 p. m.